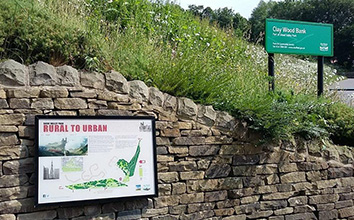 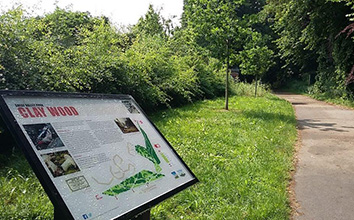 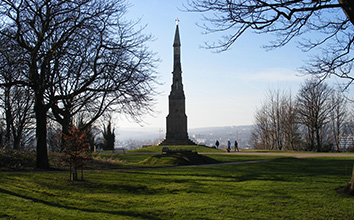 The Cholera Monument Grounds and Clay Wood are less than a mile south east of the city centre on dramatically rising ground. They are situated close to Sheffield train station and the Sheffield college city campus.

The Cholera Monument Grounds and Clay Wood is open at all times and there is no admission charge.

Getting to the park

There are three entrances, one off Claywood Road, one off Norfolk Road and another off Shrewsbury Road which leads directly to the monument.

Directions to the park on Google maps
Travel South Yorkshire

The park is a 20 minute walk or 10 minute bike ride from the city centre.

A number of different bus services operate near the Cholera Monument Grounds and Clay Wood.

The Cholera Monument is a memorial to the Sheffield citizens who died during the cholera outbreak of 1832, and is of national significance. It is a prominent and popular landmark, visible from many parts of Sheffield. The monument was designed by Michael Ellison Hadfield and completed in 1835. It is illuminated during night hours and it can be clearly seen from the surrounding areas.

A clay cobbled mound art installation was created in 2004 representing the individuals who lost their lives. The main entrance gate contains a series of interpretative panels depicting the historic aspects of the cholera outbreak together with personal memories of the local community.

402 cholera victims were buried in grounds between Park Hill and Norfolk Park adjoining Clay Wood. The exact extent and location of the burial ground is not clear. However, the site contains an elevated mound marking the Master Cutler’s grave. A stone marking the grave is in good condition and repair work to the supporting stones and surrounding railings has now fully restored this feature.

There is no physical barrier between Cholera Monument Grounds and Clay Wood, they effectively combine to form one larger open space. Clay Wood is a sycamore-dominated secondary broadleaf woodland with a small network of footpaths. It is approximately one hundred and thirty years old.

Other species present in the canopy include beech, sweet chestnut, ash, oak, holly and hawthorn. The under-storey includes areas of glade created through thinning works. This has allowed various grasses to establish and some small oak, ash, elm, holly, hazel and hawthorn are present.